9 Months imprisonment for hate crimes against Gülen Movement in Germany

Hakan Koçak was sentenced to 9 months’ imprisonment due to insulting and threatening the volunteers of the Hizmet Movement in Nürnberg, Germany. The judge also told Kocak long-term advice and explained that Germany is a constitutional state.

BOLD- In Germany, the Nürnberg Court has sentenced Hakan Koçak (38), who swore, insulted and threatened the volunteers of the Gülen Movement in the middle of the street, to 9 months imprisonment and 50 hours of social service.

Koçak has been charged with approximately 10 counts of crimes and accepted them all in the court. He will go to prison for his sentence if he commits a crime within 3 years.

The event took place on 22 December 2017 in Nürnberg. 9 volunteer activists who are members of the Gülen Movement, had set up a booth for 666 babies imprisoned with their mothers (666 babies were in prison at that time). Their goal was to inform passers-by and to draw attention to this situation.

After a while, Hakan Koçak approached the booth and took a picture. Kocak’s German wife warned him not to continue and they walked away from the booth. After 10-15 minutes, Koçak came back, and this time he started to ask questions to the activists Sezgin Ç. (39), his wife Seher Ç., Mustafa M., Aysan A., Uğur A.

Sezgin Ç. told how the event happened: “First of all, he asked whether we were the members of the Gülen Movement. I told him I’d give information if he showed me his identity card. I emphasized we were not there for political reasons. When he started swearing, I told him that he had to leave there, or we’d call the police. He became furious and started to attack verbally, swear, and threaten. He said he would destroy the cabinet and give the photos he took to the Turkish Consulate in Nürnberg. He also called me to the back street and threatened me with death.

When Hakan Koçak came back for the second time, Seher Ç., opened his phone camera and recorded these moments. In the video that was popular in social media at that time, Koçak used words including curses, heavy insults, threats.

Sezgin Ç., wrote the curses that we had to censor as follows in the petition he submitted to the court.

Sezgin Ç who works as an engineer in an international company and 9 activists filed a criminal complaint against Hakan Koçak. In the first and last court on Thursday, 9 May 2019, Sezgin Ç. reported that Hakan Koçak was sentenced to 9 months of imprisonment and 50 hours of social security due to malicious injury.

Koçak who has been charged with approximately 10 counts of crimes up to today and accepts them all, will go to prison for his sentence if he commits a crime within 3 years. Koçak is a cargo carrier in a private company, married to a German and has three children.

THE JUDGE ADVISED: GERMANY IS A CONSTITUTIONAL STATE

According to Sezgin Ç.’s expression, The judge of Nürnberg Court advised to Koçak that Germany is a constitutional state, he could not insult such a person in different ideas as he did in the video, he could not provoke or threaten people and he had to learn them.

SEZGİN Ç .: OUR PURPOSE IS TO DRAW ATTENTION TO THE BABIES IN TURKEY’S PRISONS

“We had set up a tent. While we were informing the questioners about the babies in Turkey’s prisons, Koçak came to the stand. My wife saw her and she warned me. She said he was taking our picture. After 10-15 minutes, he came again, and this time the phone’s camera was on. We had two female friends at the stand. First, he attacked them and started to insult. They didn’t accept to contact with him, then he came towards me. I thought he was a consular officer. I asked who he was and I wanted him to show me his ID. He didn’t show it. I returned the curses to him. Realizing that we would not respond to him, he took off his jacket, shouted, and started to use gross words heard in the video. We’ve filed a complaint petition. We have learned in the court that he has been charged with approximately 10 counts of crimes. He’s got parole on all of them.”

HE ATTACKED AND STRANGLED A FRIEND OF OURS

“With the call of the prosecutor, he is sentenced to 9 months’ imprisonment for man-wounding. He attacked a friend of ours by strangling him. The prosecutor has opened a court due to previous crimes like that. I, my wife, two female friends and the friend strangled were called as witnesses in the court. We were not parties there, because it was a public case. The judge read all of his crimes.”

THE LAWYER OF NÜRNBERG TURKISH CONSULATE WAS IN THE COURT

Kocak’s former lawyer Cüneyt G. was also there. He was also a lawyer at the Turkish Consulate in Nuremberg. I don’t know if he’s still going on. The court took an hour. Koçak has accepted all charges. The prosecutor read the file. The prosecutor wanted more punishment but there is an event called bargaining. The lawyer, the prosecutor, and the judge agree between themselves. Bargaining lasted 20 minutes. They declared the decision. We will file a law of torts.”

THE COURT REFUTED THE INTERVIEW WITH DAILY SABAH

Hakan Koçak had an interview with Daily Sabah on 27 February 2018. He said;” I did not hurt or beat anybody. They walked on me.” It was also revealed in the court that Koçak’s statement was not accurate. 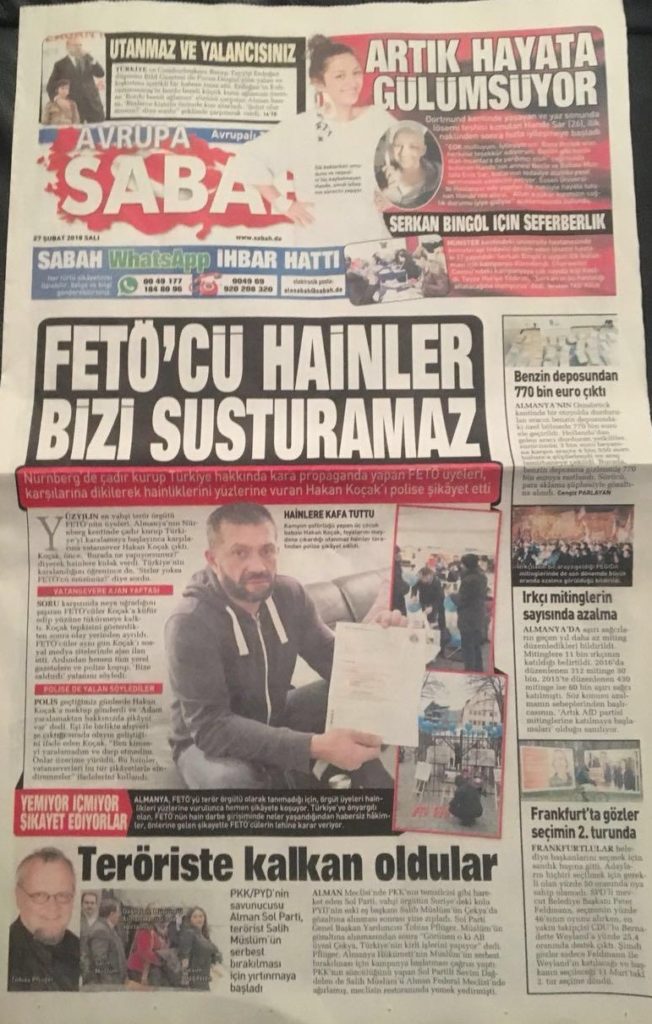