Arrested, gave birth and sent back to prison while they were pregnant

Two women in two different cities gave birth. Mother and her babies were sent to prison after birth. One of the imprisoned mothers was divorced when she was pregnant.

One in Istanbul and the other in Erzurum two women prisoners gave birth one and another, and both were sent back to prison together with their babies one day after the birth.

Şeyma Tekin, who gave birth yesterday, was sent back to prison with her 1-day old baby.

Şeyma Tekin, 24 years old, who was still in the prime of her life, got married in 2017, arrested 7 months ago, had to get a divorce two months ago.
Tekin, who was two months pregnant when she was arrested, gave birth yesterday and was sent back to the 25-person ward with her one-day-old baby.

At the first examination of the doctors, the baby (Yusuf Burak), who hadn’t been grown enough while in the mother’s womb, was physically weak and his heart was diagnosed as Atrial Septal Defect (ASD).

Despite the opinion that the mother and the baby should be taken care of, the detention was continued.

Şeyma Tekin, who was taken to Erzurum Nenehatun Maternity Hospital at 23:00 pm the night before, gave birth to a boy at 11:00 in the morning.
Yusuf Burak named baby was put back to the Erzurum E-Type Closed Prison today together with his mother. Şeyma Tekin was taken into custody on the day of the June 24th, 2018 parliamentary elections after her name was given by a confessor.

After a day in custody, she was brought to trial and the judge who was interrogating threatened her to give someone`s name or she would get ten years of imprisonment. Because she said: “I do not know anyone.” she got arrested. She was sentenced to 6 years and 3 months` imprisonment. Young mother’s file is currently in court of appeal.

HER HUSBAND DIVORCED HER DUE TO SOCIAL PRESSURE

Şeyma Tekin, who was sent back to the prison with her baby, learned that she was pregnant shortly before she was detained. However, aside from supporting her wife, the husband filed for divorce because of social pressure.

As a result of social pressure and threats; the husband who did not want to be married to a woman in prison, divorced the pregnant wife while she was in prison.
Şeyma Tekin’s father Halil Tekin expressed his reaction on Twitter. 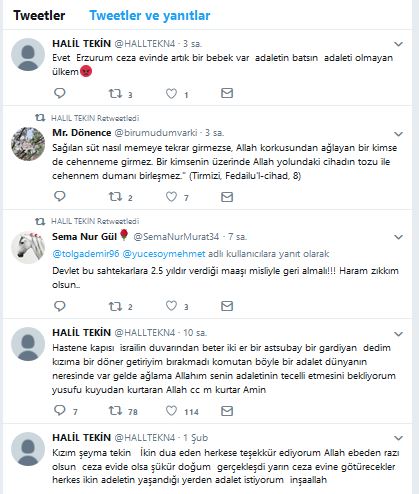 Halil Tekin, “it was told us yesterday morning at 9:30, we went to the hospital, they did not even take us to the delivery room. Her mother could hardly see her at 05:00 pm in the afternoon. I have only one daughter. We doted on her, now all these happened. How it works is justice in the Republic of Turkey, I do not understand. I am an uneducated person. I’m only a junior high school graduate. We live here in the countryside. They arrested my daughter because my daughter didn’t give someone else`s name. They didn’t ask any other question. How do such things happen? I don’t know what to say! What did we do? My daughter is spotless cotton. God, please help us.” said.

Şeyma Tekin and her baby Yusuf Burak were released on 28 February 2019, exactly 28 days after the birth. Currently, they live in Erzurum in Turkey. she divorced, she went back to her father`s house. She took back the custody of Yusuf Burak. But she still hasn’t pulled through what she experienced during the prison process. She is afraid to walk out of the house alone and walk in the streets. She doesn’t want to go out. On May 28, 2019, for the first time, she went on a trip with her son.

BEYZA DEMIR AND HER BABY ARE IN BAKIRKOY PRISON

Beyza Demir, who was arrested in Edirne with her husband Emin Demir three months ago, gave birth in a hospital in Bakırköy province on 29 January and She was sent to prison two days after the birth.

Beyza and Emin Demir married in 2013 and they were teachers in private schools. Since one confessor gave their names, they had an arrest warrant.
Beyza Demir, who is staying in Bakırköy Women’s Closed Prison, is not as fortunate as Şeyma Tekin.

On 14 January 2019, Istanbul 14th High Criminal Court sentenced Beyza Demir to 7 years and 6 months imprisonment in her first trial.
She’s still under arrest in the same prison with her daughter Ceyda. When the baby was two months old, she caught a germ from the salivary gland and underwent surgery. The mother’s health is in poor condition too.

LAW ON EXECUTION OF SENTENCES IS OVERTLY BEING MANIPULATED

The most difficult periods of a woman are the process of pregnancy, the birth and the postpartum…
Even if there is no health problem, imprisonment of convict women who have given birth according to article 16/4 of the Penal Law No. 5275 should be postponed for 6 months. Moreover, pregnant women can’t be arrested.
This law is not applied to women who are detained for being a member of the Gulen Movement.