Broken Alas family is looking for a solution…

Sedef, who cannot go abroad for treatment due to a restraint on her passport, is stuck in Georgia with her mother who has difficult times during her pregnancy; her father is also stuck in Poland.

BOLD – The state of emergency has broken down many families with the detained mothers and fathers in separate prisons, and also with family members who were stuck in separate countries. What The Alas family, who has a daughter of cerebral palsy, has been through is among the most difficult sufferings that these families have experienced.

Doctor’s appointments which had been arranged in Sweden and Singapore for the treatment of Sedef Alas did not happen because of the restraint on 6-year-old Sedef‘s passport.

The family had to fall apart. Sedef Alas and her geography teacher Elife Alas are stuck in a very difficult life in Georgia. Turkish teacher father Samet Alas is in Poland.

The family, who had to seek asylum in two different countries, cannot get together because of the different asylum laws of Poland and Georgia. The father Samet Alas who seeks for the reunion of the family according to United Nations Convention on the Rights of Persons with Disabilities describes their difficulties:

“My wife and I both were working in the Gulen Movement’s teaching intuitions. When we were unemployed, we moved from Maraş to Ankara in order to help my daughter with cerebral palsy to find treatment and maybe a new job. Indeed, I found a job in a company. During the state of emergency, the police came to my house when I was not at home for reasons such as depositing money into Bank Asya and being a member of a foundation. I learnt that I had a detention order against me. Then I had to run and live as a fugitive until the end of 2018.

One of my friends kidnapped by the police with a white Toyota, similar to the Black Transporter incidents. After a while, they released him. I decided to go abroad on the possibility of something similar that could happen to me. At the beginning of 2019, I illegally slipped over the border to Greece. Then I went to Poland. My goal was to go to Germany, but I was detained at the airport and spent two months in a refugee camp. Now I’m waiting for the finalization of my asylum seeking process in Poland” 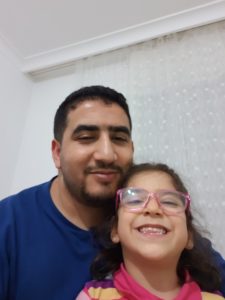 In this process, doctor’s appointments were arranged for the treatment of Sedef in Sweden and Singapore, but this treatment was not possible due to the restraint of 6-year-old Sedef’s passport based on the State Decree-Law.

Samet Aras decided to take them abroad because he was afraid of the fact that legal processes had started about his wife and his disabled daughter Sedef could be left alone. The only country that could be visited was Georgia with a national ID. He made his wife and daughter gone to Georgia:

“My wife is going through a difficult pregnancy period. Because of the likelihood of problems similar to the first child, habitually doctors asked her to stay in the hospital until delivery. However, because she couldn’t leave our disabled daughter alone, she had to return home.

There are some families around, but they have to stay alone at home at night. My daughter can’t even go to the toilet on her own. My wife has to go to bed all the time because of heavy pregnancy. They’re having a hard time. The second child will be born, but we could not convince anyone from the relatives to go there and help. We’re desperate right now.” 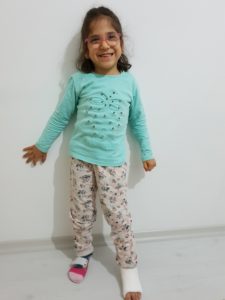 “SEDEF COULD NOT WALK AGAİN”

Samet Alas says that: while in Turkey, her daughter started walking with regular physical therapy however Sedef has started to lose her ability to walk again due to the interruption of physical therapy in Georgia:

“My daughter has cerebral palsy. she should receive 3 or 4 sessions of physical therapy and one day of individual training per week. When she does not receive physical therapy, she loses her ability to walk and starts to fall, unfortunately, she begins to fall again right now. She was good in the last year, and she had started to walk inside the house. Sometimes she has a nervous breakdown. Because of her longing for father and having to stay at home constantly. My wife is pregnant and she can’t carry her out. There is an apparatus in the child’s foot. Because she grows, it must be changed every 6 months. But since we couldn’t change it, she had wounds on her feet. They do not meet the requirements in Georgia. She can’t even meet her own toilet needs.” 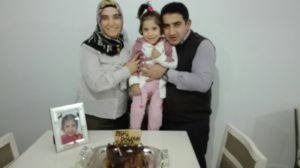 “I MUST BE REUNITED WITH MY FAMILY”

Samet Alas said that the regression and difficulties experienced by her daughter fell under the scope of the United Nations Convention on the Rights of Persons with Disabilities. He said that within the framework of this agreement, Sedef should be taken to a country where treatment can be made.

He also stated that he should be with them for the care of his pregnant wife and disabled daughter and he wants the family reunification process to be completed as soon as possible.

Alas, who applied to the authorities for this, says that: “the procedures take too much time, but there is no time, especially for my daughter, who began to lose her ability to walk.”

“Polish asylum laws and Georgian asylum laws are very strict to transcend. However, due to the special situation of my family, my daughter’s disability, and my wife’s heavy pregnancy, our family reunion needs to be addressed in a special context.”