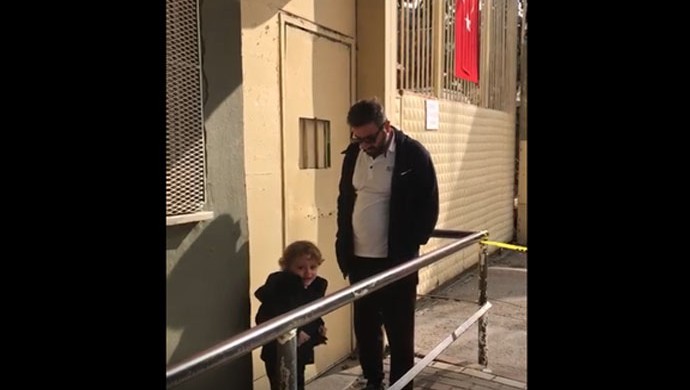 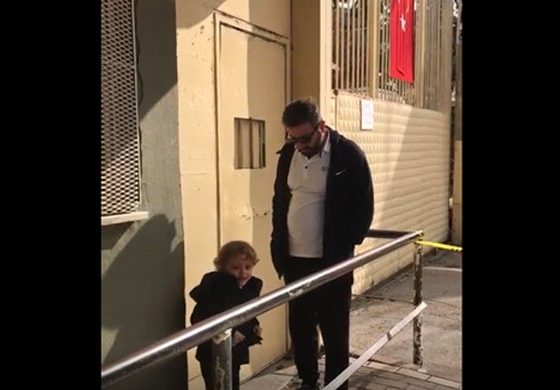 Guards deny entry to toddler who stays with his mom in prison, making him burst into tears

Miraz, one of the hundreds of infants who are held with their mothers in prison in Turkey, burst into tears after he was not taken back to prison by the guards who asserted that it was a public holiday, after spending the weekend with his father.

BOLD – Miraz baby is being held in Gebze Women’s Prison with his mother, Gülistan Diken Akbaba. He was taken out of prison on Friday by his father, Cengiz Zaza Akbaba, to spend the weekend together. The father, who spent all weekend with his son, went to prison on Tuesday with his son to leave the toddler with his mother again.

After attending a non-contact visit with his wife, Cengiz wanted to leave the child to his mother. However, the prison officials stated that the mother cannot take the boy on the grounds of having a public holiday. Turkey commemorates the 29th of October as the day the Turkish Republic was founded.

His father went out along with the kid when Miraz was not allowed to stay with his mother despite their objections. His tears were recorded by some relatives.

There are hundreds of pregnant women and mothers with their babies in Turkey’s prisons, even though the practice is against the law in the country. While some pregnant women undergo miscarriage due to poor confinement conditions, some babies in prison also suffer from growth retardations. During the post-coup crackdown, women associated with the Hizmet Movement and many women from the Kurdish cause faced this situation. Likewise, there are many children with their mothers who have not reached the age of primary school in prison. 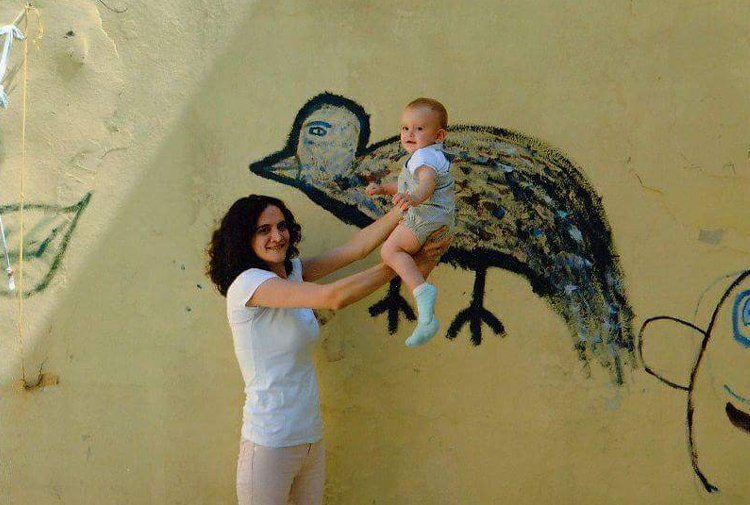 Miraz and his mother in prison.

Ankara Bar Association compiled a joint study report on seven people who became victims of enforced disappearance in 2019. The report was sent to the Ankara Chief Public Prosecutor’s office, along with a criminal complaint.

Mustafa Yılmaz, Salim Zeybek, Özgür Kaya, Gökhan Türkmen, Erkan Irmak, Yasin Ugan and Yusuf Bilge Tunç were abducted by men with black transporter vans in 2019. Four of them were handed over to the Ankara Police Department after being tortured for six months. The two were similarly given to the police in the 9th month — no word from Yusuf Bilge Tunç.

Many claimed that these people were abducted by government officials and tortured in the area called “Çiftlik (Ranch),” which belongs to the Special Operations Directorate of the National Intelligence Organization. Among them, Salim Zeybek was abducted in front of his wife, Betül Zeybek, and his children. However, the criminal complaints made by neither the Zeybek family nor other families have been adequately pursued by the prosecutors.

In the criminal complaint, the studies conducted as a result of the application of the relatives of the abducted were elaborated and following the issuing of the Joint Monitoring Report, it was stated that with the decision of the Ankara Bar Board of Directors dated 05/02/2020, numbered 77/28, it was decided to convey the denouncement to the Ankara Chief Public Prosecutor’s Office.

The criminal complaint stated the following:

“As a result of the researches and evaluations made by Ankara Bar Association Human Rights Center on the alleged enforced disappearances; as applicant Nuray TUNÇ’s husband Yusuf Bilge TUNÇ’s whereabouts are still unknown, an investigation that complies with international standards regarding her complaint needs to be carried out without delay. In terms of other applications, whose relatives have been enforced disappearances for at least five and maximum nine months, and which appeared in the police after the applications, it was determined that the suspected were deprived of the following: rights in the light of the state’s obligation to protect the right to life-related to enforced disappearance and to conduct an effective investigation, the right of everyone accused of crime to have a one-to-one meeting with their lawyers, the right to benefit from the assistance of the advocate of their choice, the right to appear before the judge immediately and the liabilities of the person whose freedom is restricted, having investigations open to public supervision and no investigation was carried out in which victims’ relatives participated in the process.”

In the criminal complaint, which stated that allegations of violations of rights were not duly carried out following the universal standards on rule of law, lawyers demanded from prosecution to deepen the investigation.

“For the reasons explained above and to be considered as ex-officio; We kindly request you to initiate a criminal case against the suspects to be detected in the light of the minutes, reports and documents obtained regarding the allegations of enforced disappearances as a result of the applications received by the Ankara Bar Association.”

The report includes considerations about the relatives’ statements of the abductees and the documents they provided.

The members of the Human Rights Center of the Bar Association went to meet with Erkan Irmak, Yasin Ugan, Özgür Kaya and Salim Zeybek in Sincan No.1 F Type Prison on August 27, 2019, only to be informed that the prisoners did not want to meet lawyers, and they only met Salim Zeybek. However, the minutes of their meeting with Zeybek were taken away from the lawyers forcefully, and the lawyers were subjected to insults and threats by the prison officials.

Pointing out to the denial of the right to a lawyer to the detainees by the authorities, it was emphasized in the report that the missing persons showed up in police custody in the same way, gave the same statements, had the same physical signs (weakening, distraction, etc.)

The report read that six people have never been able to meet with their families or lawyers alone and that there is a government official in all the meetings, so they have not had the opportunity to explain the torture or violations of their rights.

In the report, while emphasizing the right to hire a lawyer, it was mentioned that the family of the six people refused their lawyers, the impression that this was done as a result of pressure, and the circumstances regarding the lawyers sent to them were suspicious. 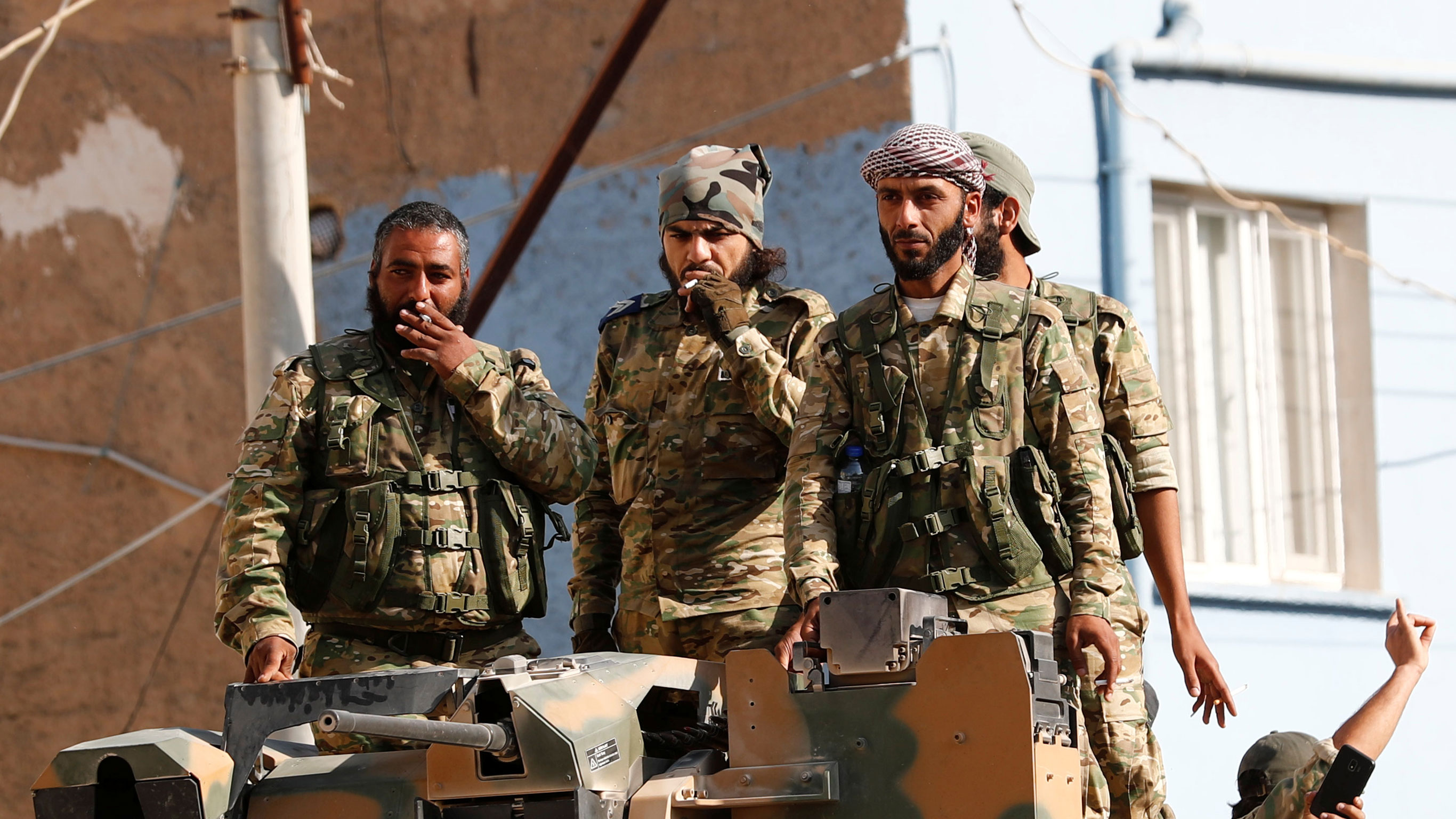 Following the naturalization of 500 Free Syrian Army (FSA) fighters by Ankara, the Turkish Armed Forces(TSK) and the National Intelligence Agency(MIT) employed these militants. The “jihadist” Simon Hassan, who started his career as a captain in the Turkish Army, is one of them.

Simon Hassan has been made a captain “fighting on behalf of Turkey,” in his own words, after three years in the Free Syrian Army. Two months ago, Turkish citizenship was granted to Hassan. He was employed by TSK as a captain and will return to his duty after receiving treatment for a short period in a hospital. He has all the social rights of a captain in TSK and is paid the same salary. Her family was also naturalized, along with Hassan. “I’m not the only one,” he says.

According to a report by Serdar Fırat from Grihat; new names and identities were given to jihadist FSA members so that they would not attract attention. According to military sources, so far, 500 jihadists were granted citizenship and were employed by TSK. The FSA militants receive the same salary as the official staff of the TSK.

There are also 15 jihadists employed by the National Intelligence Service through the same process. Security sources informed that 15 militants who were naturalized are now the official staff of MIT, and more than 200 militants from FSA are used as intelligence staff.

The jihadists’ employment by the TSK allegedly created severe distress within the Army. It is also reported that sergeants, who are in the lower rank, forwarded their discomfort through official channels, especially about those assigned to the upper positions within the command chain.

Currently, the jihadists who are acting with the Turkish Army in Syria are given 500 dollars per month.

The FSA militants, whose stance is likened to the spirit of ‘National Forces (Kuva-yi Milliye) by the administration of President Erdoğan, are now sent to Libya as mercenaries. So far, 3,000 jihadists have been transported to Libya via Istanbul, accompanied by Turkish soldiers. The jihadists wear military camouflage and bear the Turkish flag. They do not hesitate to loot in some areas while fighting in these uniforms. Two thousand five hundred dollars are paid to those who go to Libya, and a 6-month contract is signed.

Turkey sees FSA as a genuine power and wants to keep members of the FSA in Syria. So far, 15 jihadists have died in Libya. International Defense Consultancy Company SADAT conducts the FSA training and programming, and this company decides who will be naturalized and determines their ranks within the military.

Impunity for torturers has become a state policy in Turkey. The latest example was a police officer convicted of murder being promoted.

USD one and a half million -belonging to a businessman from the Laleli district of Istanbul- was stolen while a courier was transferring it in 2009. Oktay Kapısız was acting as a chief police officer in Istanbul when the incident took place. Police forces, under the command of Oktay Kapısız, raided the addresses of 29 suspects in 2010. It later came out that Murat Konuş, one of those suspects, had been tortured to death.

Defendant released despite the life sentence

An investigation was launched after authorities found that he died of torture, and four police officers stood trials as potential suspects. The Istanbul 2nd Heavy Penal Court found four police officers guilty of murder in last July. Oktay Kapsız, Ramazan Adıgüzel, Murat Ertürk ve Abdülcelil Karadağ were sentenced to aggravated life in prison on charges of “causing death through torture.” Their sentence was reduced to life in prison. The court that found the suspects guilty ordered their release pending their appeal.

Police or military officers accused of torture have rarely been given sentences in Turkey. Meanwhile, President Erdogan’s policies in recent years have allowed torturers to go unpunished.

This also happened in the latest episode: Oktay Kapısız, a chief police officer, remains in office despite being sentenced to life in prison on charges of torture. He has even received a promotion. He was appointed as a top police officer to Mugla province, one of the most beautiful holiday places in Turkey, from the southeastern city of Çukurca.

A farewell ceremony was organized in his honor, where the city’s mayor and senior military officers were present.

The statement as to how Kapısız could remain in office after being convicted of torture is quite interesting: “Since Kapısız appealed against his conviction, his punishment is not yet absolute.”

Nuri Köse, the lawyer of Konuş family who lost their relative, lashed out against Kapısız’s promotion and said “It was proved with video surveillance, witness statements and forensic reports that Murat Konuş was tortured to death. The evidence is unmutable, the facts that the case is not closed, the suspects were released after receiving lifetime jail term, and they keep their posts, demonstrate that the trial was not fair.”

Human Rights Watch: Allegations of Abduction and Torture Not Investigated in Turkey