Report on torture in Turkey

Advocates of Silenced Turkey (AST), a US-based human rights organization, prepared a report on the torture incidents and deaths, which occurred after the coup bid that took place on July 15, 2016. In the report, two victims alleged that they were abducted by the Turkish National Intelligence Service (MIT) and subjected to torture.

Titled as “Systematic Torture and Ill-Treatment in Turkey,” the report covers the cases of Gökhan Açıkkollu, Ayten Öztürk, Zabit Kişi, Ministry of Foreign Affairs employees, the tortured children in Van city, as well as the very first interviews conducted with two people abducted by MIT. The 128-page report examines 104 cases.

Torture and ill-treatment took the lives of 93 people

According to AST, 93 people died in prisons due to torture, ill-treatment, and neglect. As a result of interrogations under torture during detention, 11 people were killed. In addition to registering these individuals’ names, AST highlighted 10 torture cases.

A former official from the Presidency

Mr. A.G. (The name is not provided by the rapporteur due to security grounds), a former official from the Presidency

was brought to the MIT’s Yenimahalle Campus with a sack over his head and while constantly being beaten. He stated that he was electrified on a device called “the Palestinian hanger,” beaten up with whips, sticks, and batons and that he was also subjected to rape attempts.

Staying in the 4.5-square-meter dark cell for weeks, A.G. disclosed that he was actively subjected to similar physical tortures especially during the first 20 days. Accused of being a member of the Gulen Movement, A.G. was left hungry and thirsty and faced curses, insults, and threats on his family.

He alleged that an officer from the presidential office came to this interrogation center and received reports from the tormentor. He was asked to become a confessor, to sign pre-prepared statements and to work as an informant in the Gülen Movement by working for the MIT.

It was discussed by İ.S. in the report that he was tortured in the same premises for 7.5 months. When he was released after losing 30 kilos, he predicated that even his wife could not recognize him as similar torture methods were applied to İ.S.

Plight of children with imprisoned parents

Impunity for torturers has become a state policy in Turkey. The latest example was a police officer convicted of murder being promoted.

USD one and a half million -belonging to a businessman from the Laleli district of Istanbul- was stolen while a courier was transferring it in 2009. Oktay Kapısız was acting as a chief police officer in Istanbul when the incident took place. Police forces, under the command of Oktay Kapısız, raided the addresses of 29 suspects in 2010. It later came out that Murat Konuş, one of those suspects, had been tortured to death.

Defendant released despite the life sentence

An investigation was launched after authorities found that he died of torture, and four police officers stood trials as potential suspects. The Istanbul 2nd Heavy Penal Court found four police officers guilty of murder in last July. Oktay Kapsız, Ramazan Adıgüzel, Murat Ertürk ve Abdülcelil Karadağ were sentenced to aggravated life in prison on charges of “causing death through torture.” Their sentence was reduced to life in prison. The court that found the suspects guilty ordered their release pending their appeal.

Police or military officers accused of torture have rarely been given sentences in Turkey. Meanwhile, President Erdogan’s policies in recent years have allowed torturers to go unpunished.

This also happened in the latest episode: Oktay Kapısız, a chief police officer, remains in office despite being sentenced to life in prison on charges of torture. He has even received a promotion. He was appointed as a top police officer to Mugla province, one of the most beautiful holiday places in Turkey, from the southeastern city of Çukurca.

A farewell ceremony was organized in his honor, where the city’s mayor and senior military officers were present.

The statement as to how Kapısız could remain in office after being convicted of torture is quite interesting: “Since Kapısız appealed against his conviction, his punishment is not yet absolute.”

Nuri Köse, the lawyer of Konuş family who lost their relative, lashed out against Kapısız’s promotion and said “It was proved with video surveillance, witness statements and forensic reports that Murat Konuş was tortured to death. The evidence is unmutable, the facts that the case is not closed, the suspects were released after receiving lifetime jail term, and they keep their posts, demonstrate that the trial was not fair.” 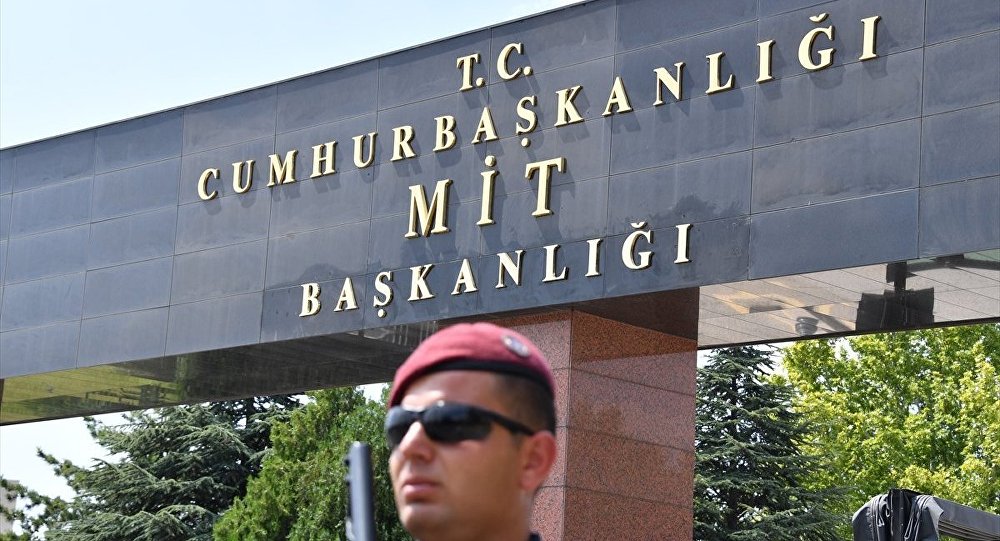 The detainees who have reportedly been tortured in Ankara turned out to be the MIT employees. H.Ç.’s lawyer told about her observations in the Police Department of Ankara.

Twenty-seven people who were detained in the pitch-black morning of December the 18th in Ankara by the Prosecution Office, were identified as former employees of the Prime Ministry. However, it turned out that they were the purged personnel from the National Intelligence Organization (MIT) and that they were subjected to intense pressure during the detention process.

According to information provided by the lawyers of detainees in Ankara Anti-Terror Branch, the first day of detention was full of threats, insults, and psychological torture.

The wife of a former MIT employee, H.Ç., who is also a lawyer, provided the information that those who were in custody were ‘interrogated’ at 22.30 on the first day. They were threatened with rape and sexual assault by showing bottles lined up side by side.

H.Ç.’s wife said that she visited her husband twice, and her first visit was yesterday. She stated that everything appears to be normal yesterday, nevertheless after the interrogation during the night, she saw that her husband was in a panic today:

After being expelled, my husband had neither undergone any investigation, nor prosecution. When I met him, he was in fear and scared. Ordinarily, the lawyer interview rooms are closed and no cameras are fixed.

But interestingly it was not the same in the Ankara Anti-Terror Branch. There were full of glasses on both sides of the room. The outside sound was directly coming inside, and vice versa. My couple started to explain by saying, “This place is not good.” At 22.30 in the evening yesterday, they took seven other people, who were in the same situation as him, for ‘interview.’ They took him somewhere else in Anti-Terror Branch. They had a half-hour ‘interview.’ They insulted and threatened the entire half-hour meeting. They threatened them over their wives, and as this part hurt him very much, he did not give too many details. They threatened and insulted him over the families or mothers.

They said several things like, “Even if we leave you here, we’ll pick you up again. We don’t need a warrant or a custody order to arrest you”.

“Bottles are prepared for you”

Afterward, they showed the bottles put side by side and threatened by saying, “Look, we greased this bottle for you. We say just ‘hi’ to you today; you guess what we’re going to do tomorrow.” They shoved him relentlessly. At present, he has not been beaten and subjected to violence. There is psychological torture, and they are threatened by saying, ‘Be smart, talk!!!’ and implying that torture will begin tomorrow by saying ‘See you again tomorrow!!!’.” I’m worried about what can be done during tonight’s interrogation. Previously, the same thing happened to the former employees of the Ministry of Foreign Affairs, and the Ankara Bar Association recorded the heavy torture and reported it.

The lawyers informed the Ankara Bar Association about their clients’ experiences, and the Human Rights Board of the Bar Association was authorized to meet with detainees.

It was mentioned that detained persons are kept in Ankara Anti-Terrorism Branch’s Campus, which is on the way to Eskisehir city.

On the morning of December 18, 27 former Prime Minister employees were announced to be issued a custody order. It was learned that 27 people were National Intelligence Organization personnel, not Prime Ministry. Eighteen people out of 27 could be taken into custody, and they all were purged during the state of emergency from MIT. Among them are employees working as intelligence staff and supporting staff. It is stated that detentions were undertaken within the scope of the Hizmet investigations.

The 34th High Criminal Court was established in Ankara for the prosecution of MIT employees. The establishment of a special court for judging only one institution’s staff drew criticism of the lawyers. Six people who were abducted in February 2019 and who were handed over to the police after six months of immense torture began to be tried in this court.

On the International Day of Disabled Persons, Ali & Elif Kisa was arrested for being elected to the Peoples` Democratic Party (HDP) administration. One of their children is deaf and mute and the other is mentally disabled.

On December 3, the International Day of Disabled Persons, parents of two disabled children were arrested in the Elbistan district of Maraş.

According to Mesopotamia Agency; 70-year-old Ali and Elif Kısa have been detained 3 times since 2017. Ali Kısa, who supports his family with his retirement pension, has been involved in political activities for many years. Ali Kısa, who has been the HDP district manager since HDP was founded, was detained together with his wife Elif Kısa in 2017. While his wife was released by judicial control, Ali Kısa was arrested on charges of helping the terror organization. After being detained for 7 months, Kısa was acquitted from the file on which he was tried. During his detention in prison, Ali Kısa, who had severe conditions and high cholesterol prostate surgery, decreased from 116 to 79 kilos.

Threat before the congress

Parents arrested on the International Day of Disabled Persons

Ali and Elif Kısa were arrested on December 3rd the International Day of Disabled Persons and their two children with disabilities were left alone. One of their sons is 44-year-old İsmail, who is mentally challenged, deaf and speech-impaired. İsmail has a “Severe Disability” report which means he is totally in need of his mother’s care.

Their other son is 42-year-old Ahmet, with a hearing and speech disability of 64 percent. Ahmet closed his painting workshop so that he could look after his brother. Both brothers cannot hear the doorbell as they are hearing and speech impaired. İsmail is also obsessed with cleanliness. He was bathed every day by his mother. He can not eat without the help of someone. His fingers bleed because he often cuts his nails. For not taking his medication regularly, he gets nervous.

HDP Deputy Mahmut Toğrul also pointed out the situation of Ali and Elif Kısa in the Turkish Grand National Assembly. “In Elbistan, Ali Kısa, Elif Kısa, and Bekir Kara were detained on 3 December and arrested. Ali Kısa and Bekir Kara are our current district managers and Elif Kısa is our previous district manager. Ali and Elif Kısa are 70 years old and have 2 children. One is 80 percent mentally challenged, the other is hearing and speech impaired. There’s no one else in the house. The two children are not able to look after themselves at home. The family has expressed their children`s situation in custody, but they have been arrested in spite of this.”

Dark side of Erdogan’s victory night