The Immigration and Refugee Board of Canada (IRB) has updated its data for 2020 regarding the mass crackdown in Turkey targeting an opposition group, following a 2016 controversial coup attempt.

According to many critics, President Tayyip Erdogan’s ruling AK Party has been using the abortive coup as a pretext to purge and detained tens of thousands of Turkish nationals.

IRB, Canada’s largest independent administrative tribunal, responsible for making decisions on immigration and refugees, has released information about the structure of the Hizmet movement and an ongoing crackdown targeting its followers.

As a “Response to Information Requests (RIR)” IRB quoted the Journalists and Writers Foundation (JWF), a New York-based international civil society organization, to explain the goal of the movement:

“The Hizmet movement has undergone several transformations from a small religious community to a larger conservative community to an inclusive society with the principles of service, altruism, and dedication to society.”

It also referred to Gulenmovement.com, a website “launched by a group of volunteers,” giving the objective of participants of the movement is “to attain God’s good pleasure based on the conviction that ‘service to humanity is service to God’.”

The tribunal stated that Fethullah Gulen, who has been living in “self-imposed exile” in the US since 1999, was accused by Erdogan’s government of masterminding a 2013 corruption probe against the AKP seniors, through his alleged followers within the police.

It states that the Turkish government designated the movement as a terrorist organization after the coup attempt, which resulted in over 1,500 people wounded and more than 200 people killed, referring to an Amnesty International report.

In the aftermath of the abortive coup, IRB says, the Turkish government declared a 90-day state of emergency across the country, which was extended seven times before it was lifted on 18 July 2018.

It noted that the government introduced a series of emergency decrees during that period that bypassed parliamentary scrutiny and judicial review procedures.

“A 2019 report by the Human Rights Foundation (HRF), a New York-based “nonpartisan, nonprofit organization that promotes and protects human rights globally” (HRF n.d.), states that the measures enacted by the government since July 2016 have caused “a dramatic erosion of the rule of law and a significant deterioration of [Turkey’s] human rights record,” RIR wrote in the report.

Citing various new reports, IRB indicated that “a tough anti-terrorism bill” ratified by the Turkish government soon after the end of the state of emergency allowed the government to dismiss personnel of the Turkish Armed Forces, police, and gendarmerie departments, public servants and workers.

“Hizmet has no institutional presence in Turkey today.”

Referring to a JWF statement, the report said the Turkish government confiscated the assets and personal property of business people who used to support people with financial assistance.

Family members and relatives of the detained and arrested members of the Hizmet [m]ovement are in a tough situation.

“Assisting victims in Turkey, financially or otherwise, however, is very dangerous, and many individuals have been arrested and face terrorism charges … for trying to assist the people in need. Many people are therefore looking [to leave] Turkey.”

The IRB indicated that the mass crackdown in Turkey has resulted in the dismissal, detainment, and arrest of thousands of individuals, “overwhelmingly academics, teachers, journalists, housewives, trade unionists, judges, prosecutors, police officers, military personnel and other professionals. 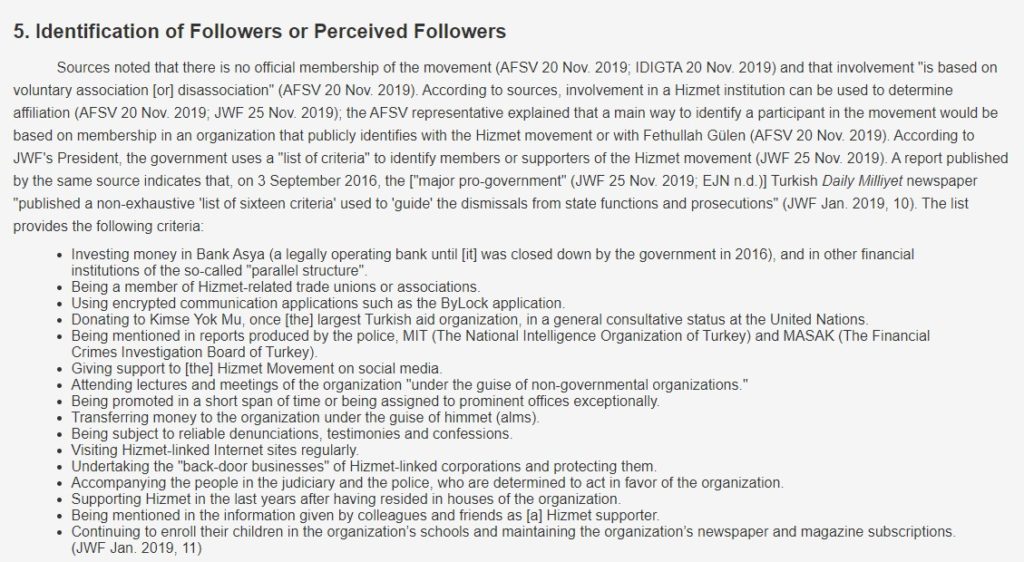 Based on various sources, the Canadian tribunal said there is no official membership in the movement. At the same time, the Turkish government uses “a list of criteria” to identify alleged members or supporters of Hizmet.

The “criteria” is being listed as follows in the report:

The report underlined that the “Turkish Authorities persecute whoever has even minim[al] contact with the Hizmet movement and its institutions. Therefore, the risk of being persecuted continues if the person was affiliated with the movement without being an actual member of the movement itself, per se.”

IRB also referred to the 2019 annual report by the US Commission on International Religious Freedom (USCIRF) and noted:

“Followers of U.S.-based cleric Gülen have faced increased persecution by the government since the failed coup in 2016.”
The President of JWF said to the tribunal that “Since the attempted coup, Turkish government officials have declared that Hizmet [m]ovement participants do not have a right to life and will beg for death in prisons.”

The Canadian immigration body also noted the cancellation of passports of tens of thousands of purged people to prevent them from leaving the country. Regarding the alleged members of the movement living abroad, the group mentioned a report by Human Rights Watch (HRW):

The IRB also said Turkey has returned or made local authorities arrest several alleged members of the movement from abroad. Ankara has managed it through operations by the Turkish intelligence officers and collaboration with local security officers in countries such as Montenegro, Kosovo, Moldova, Morocco, Pakistan, Malaysia, Azerbaijan, Bahrain, Bulgaria, Georgia, Indonesia, Kazakhstan, Myanmar, Qatar, Saudi Arabia, Sudan, and Turkmenistan.

The findings of IRB also indicated that detainees in Turkey have faced different forms of torture and ill-treatment. They include severe beatings, threats of sexual assault and actual sexual assault, electric shocks, waterboarding, punches/kicking, blows with objects, falaqa [foot beating], threats and verbal abuse, being forced to strip naked, rape with objects and other sexual violence or threats thereof, sleep deprivation, stress positions, and extended blindfolding and/or handcuffing for several days.

IRB mentioned 28 alleged followers of the movement had been a target of forced disappearances, abductions or kidnappings.

Etiketler FeaturedGülenHizmet MovementThe Immigration and Refugee Board of Canada